Bob was stationed in Germany, where his primary assignment involved working with all facets of electronic communications, including telecommunication infrastructure.

Upon completing his tour of duty, Bob returned home to the Bronx and continued his public service by joining the NYPD. Shortly thereafter, he met his future wife and after their marriage, they had four children. Their growing family brought the necessity to work a second job. Given his experience in the service, Bob found work as an electrician’s apprentice.

Later on, as Bob approached 20 years of service with the NYPD, including time spent as a veteran Detective, Bob’s Security System’s, Inc. was born. Bob’s Security knowledge of communications, criminal justice and electrical circuitry, along with the support of his Wife and family, allowed Bob to create his company and begin installing burglar alarms in residential homes in New York and New Jersey.

Soon after developing a reputation of quality installions at reasonable prices, news spread and Bob’s Security began to do commercial security, including fire alarm installations and closed circuit camera systems. Our commercial clients have ranged from mom and pop businesses, delis, professional offices, gyms, dealerships, jewelers, shooting ranges and the list goes on and on. Bob’s also honors family values and gives discounts to places of worship which promote those very values.

Bob Janelli passed away in 1994 at just 59 years old. His wife Joan and their children Robert, John and Richard continued the business philosophy until Joan passed in 2018. The Janelli family and employees, ensure that the family values and business philosophy continue. We are very grateful to have a significant number of original customers who recall working with Bob early on, as well as numerous next generation children and grandchildren of our customers.

Bob, and now his children, have a history of giving considerable discounts to service members, police and fire first responders – long before there was such a thing as a hashtag to acknowledge same. It was where Bob came from and his children saw his sacrifices first hand and are forever grateful to our public servants.

Bob’s Security also believes in the education of youth that may not choose conventional schooling. For many years Rich has worked with many organizations, including BOCES, which trains interns in the security industry. Some past mentees have started their own, very successful, businesses.

Bob’s Security also support many local social service and religious organizations, including The Center for Safety & Change and Catholic Charities. In fact, Richard has been honored as Catholic Charities Businessman of the year.

Some examples of locations that have trusted Bob’s Security with their security needs: Congregation Sons of Israel, St. Francis Church, St. Paul’s Church, St. John’s Church, the museum inside the new Yankee Stadium, the penthouse suite at the Ritz Carlton, Protein Sciences, residences in Trump Place (Manhattan), Shoprite, Harley Davidson, Saints Constantine and Helene Church, Konbit Neg Lakay and many, many others. 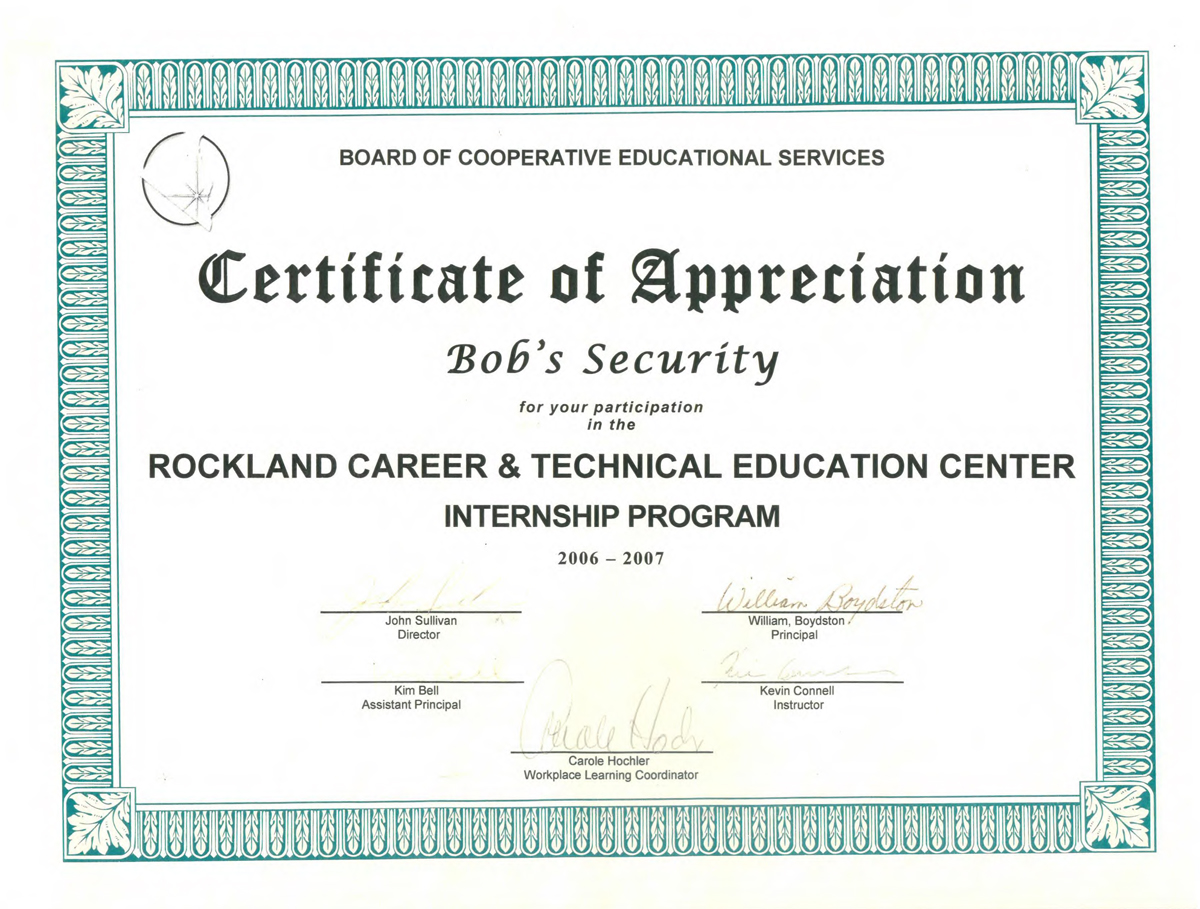 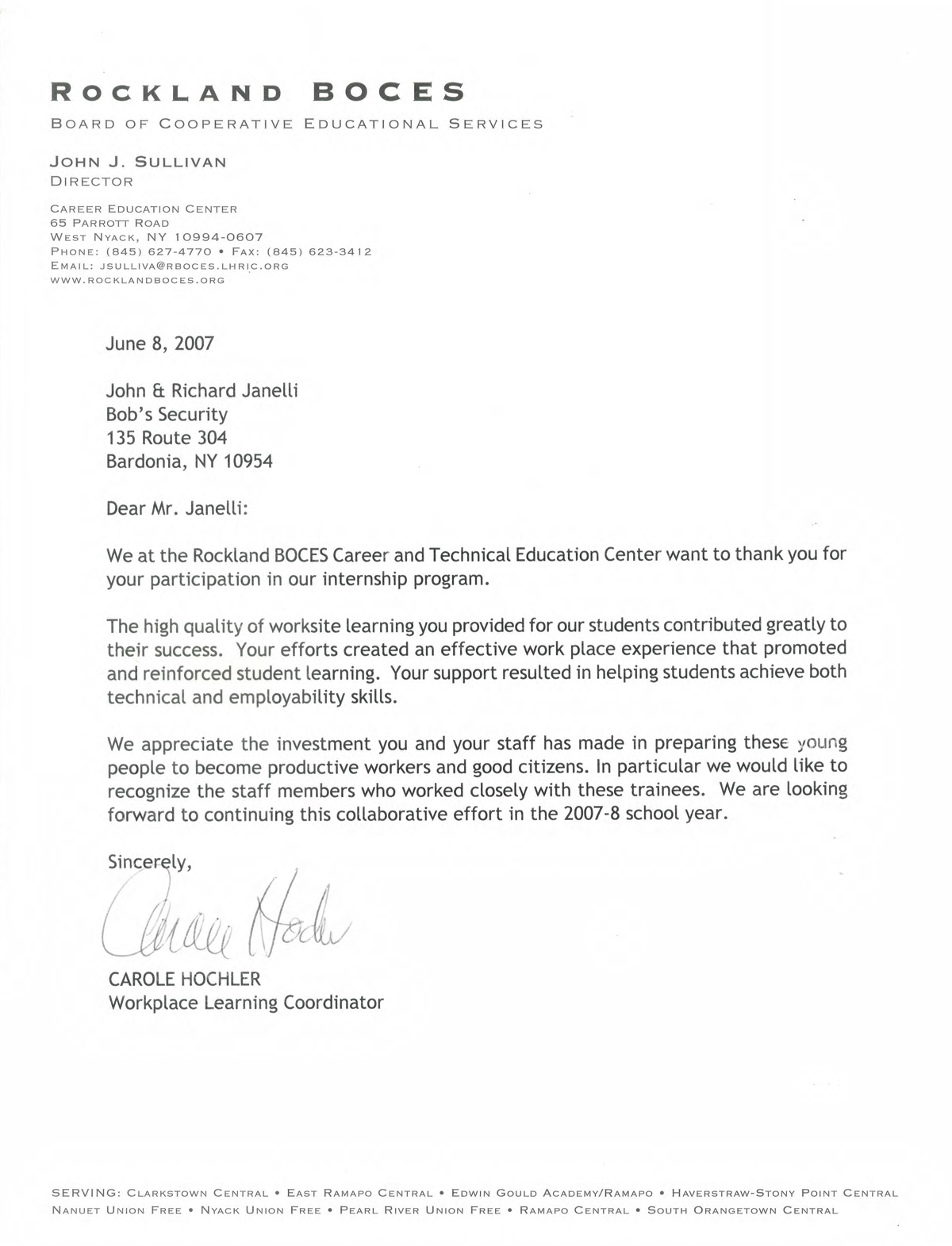 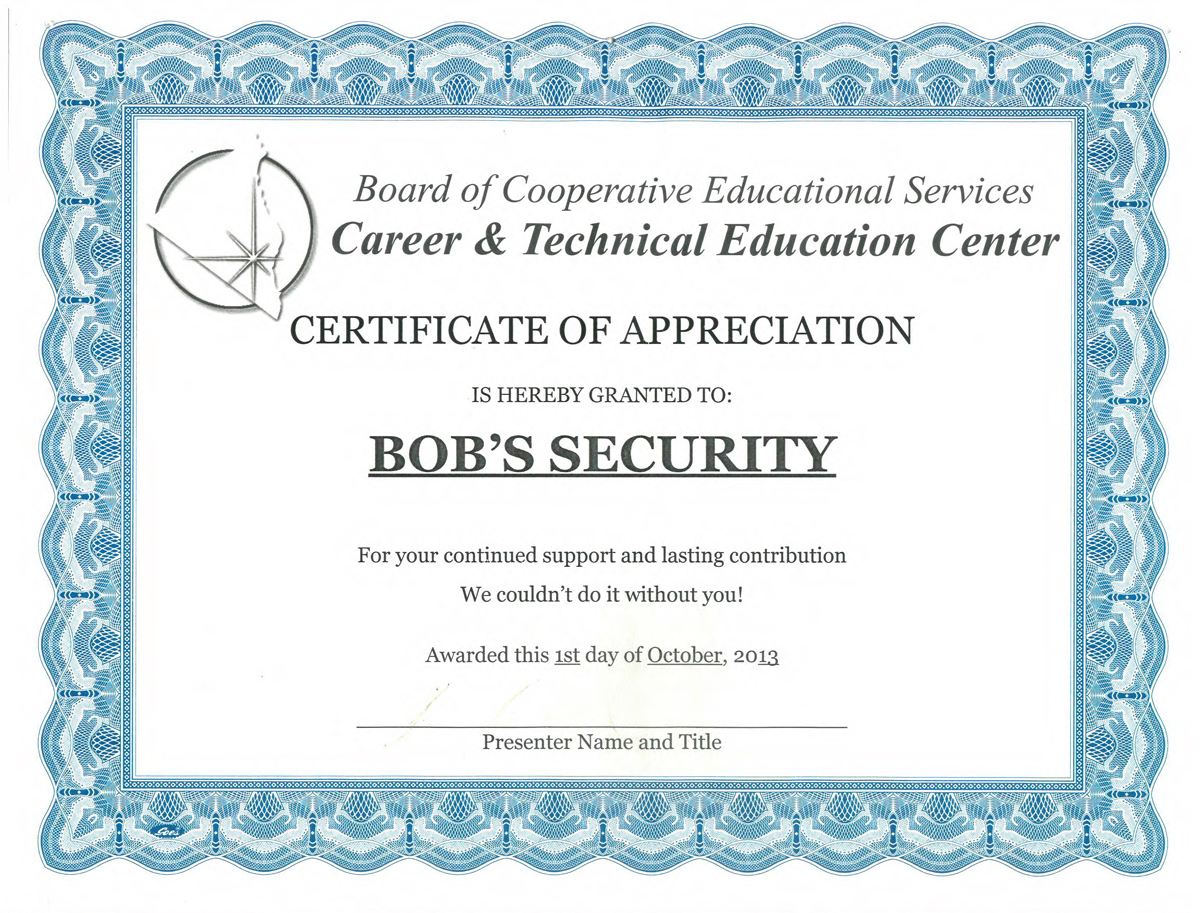 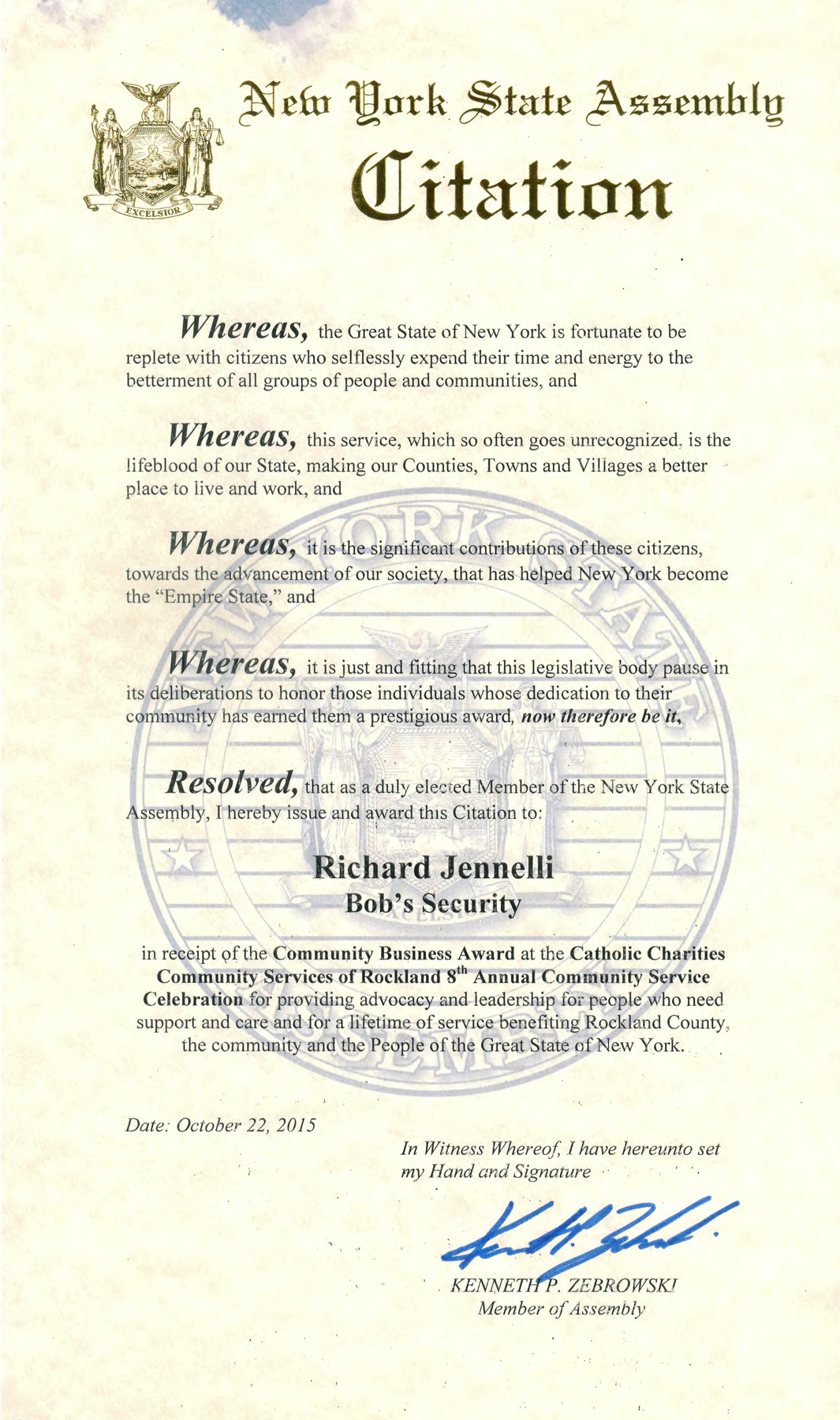 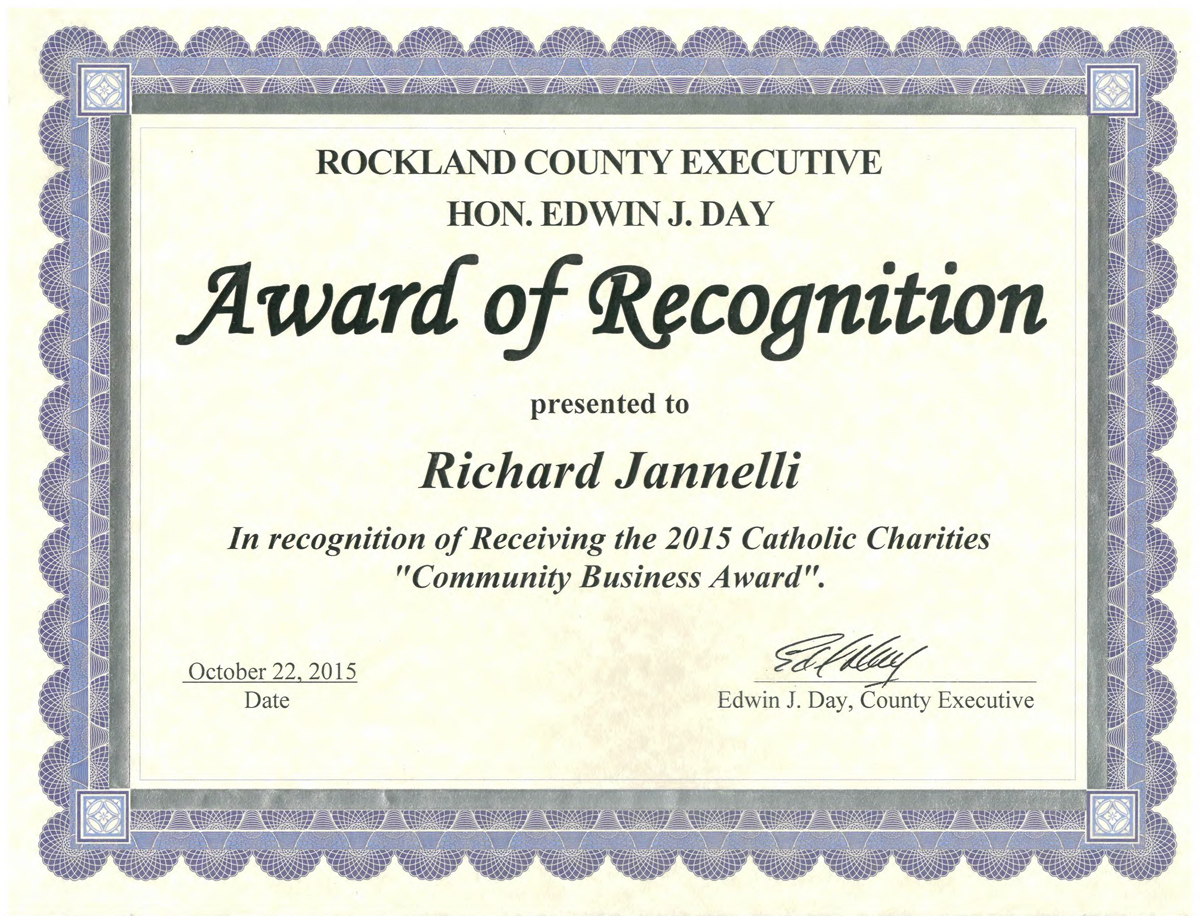 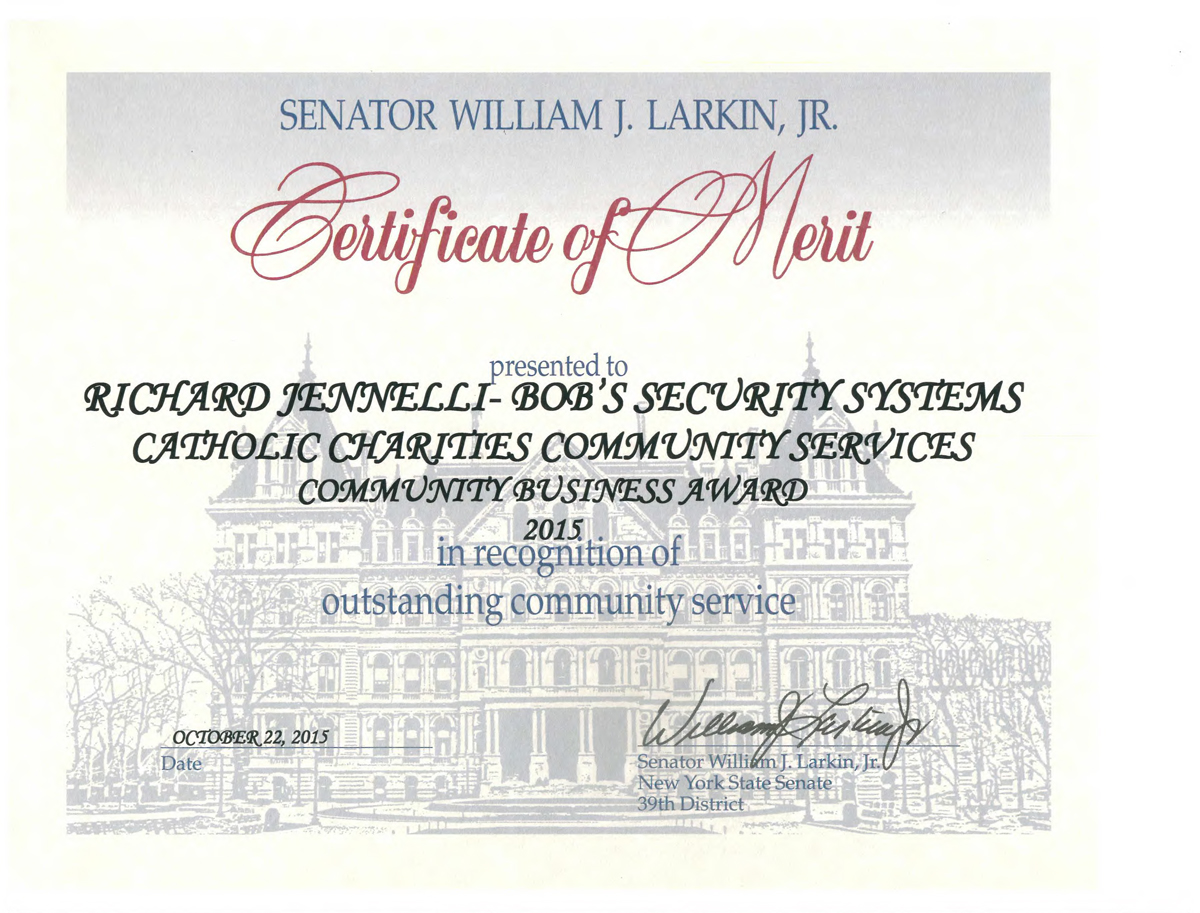 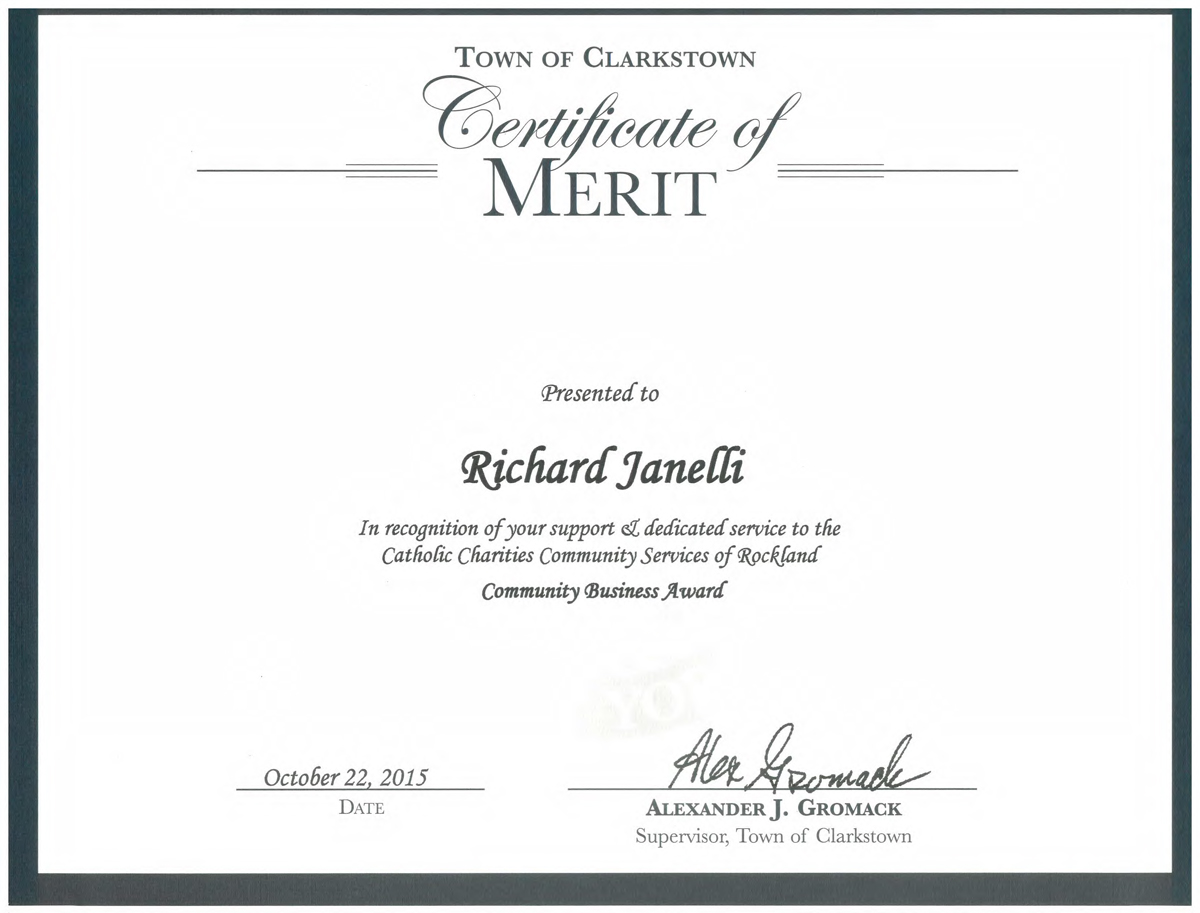 Town Of Clarkstown Certificate of Merit 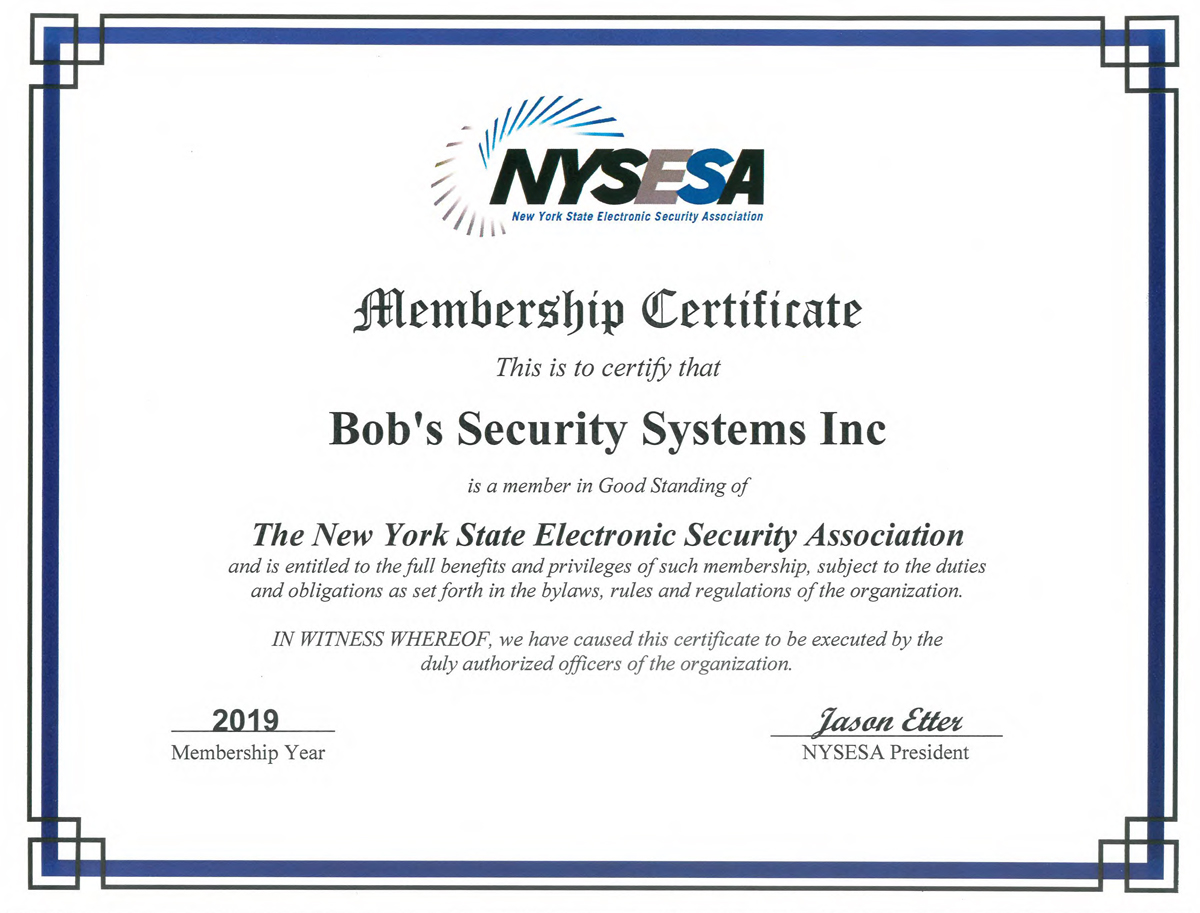 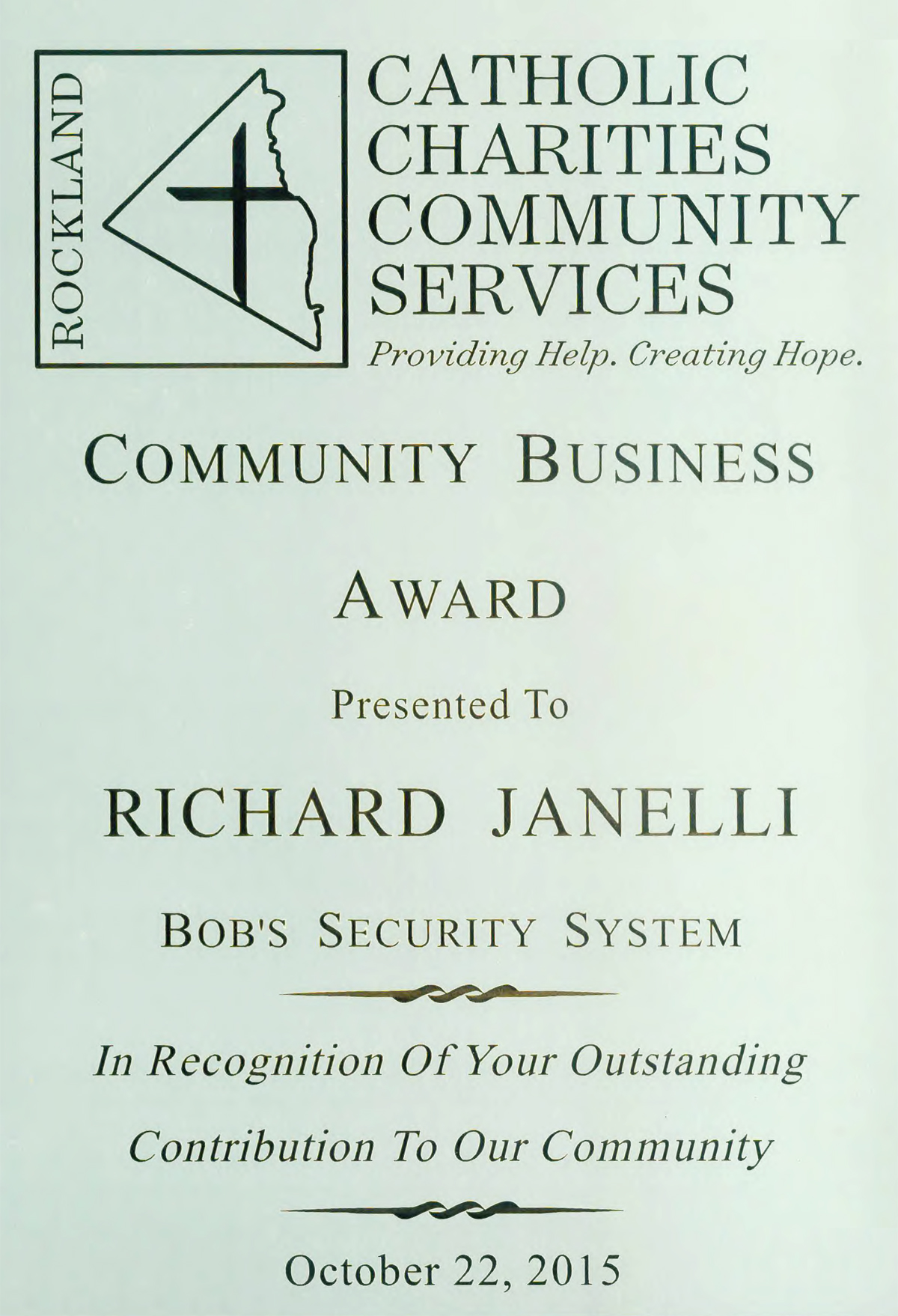 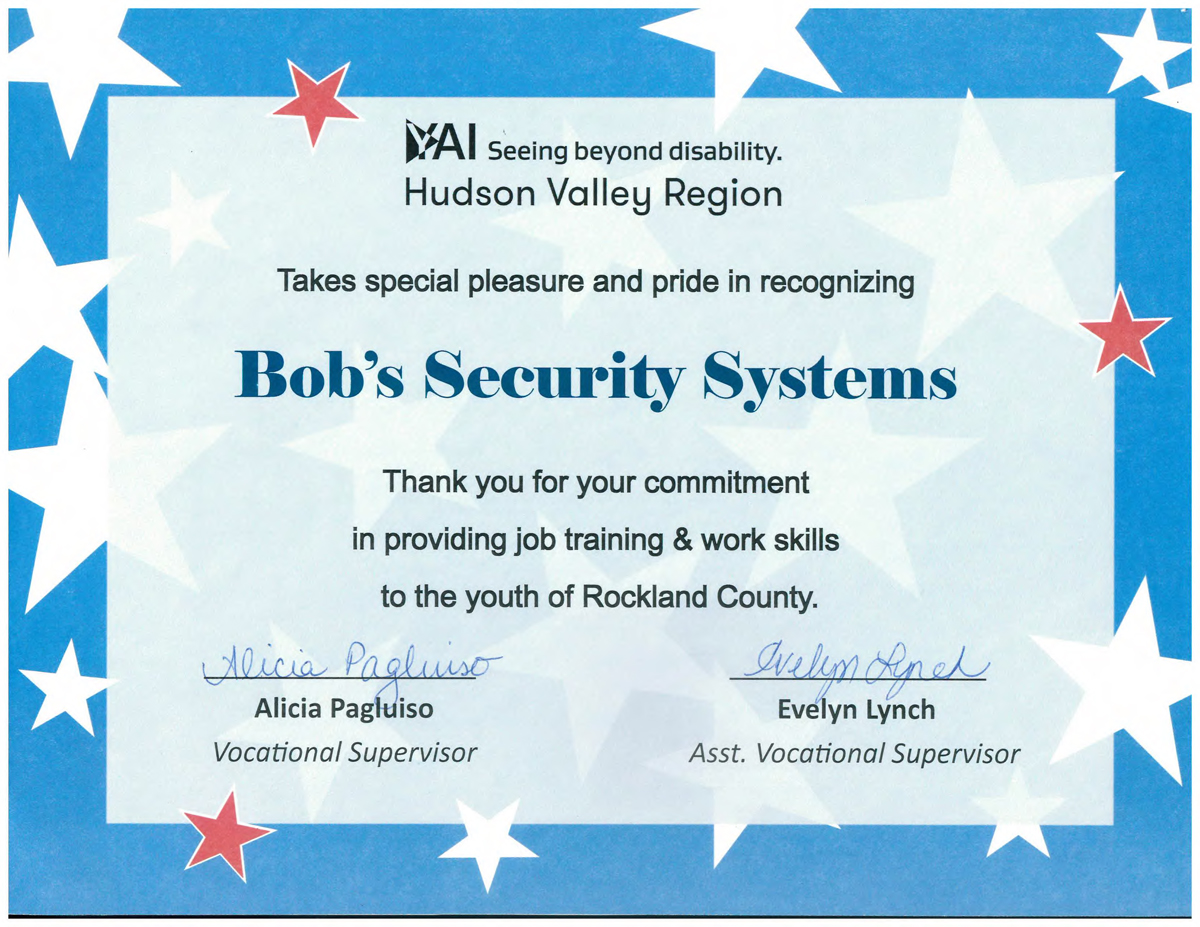 Protect Your Home or business

get a free quote 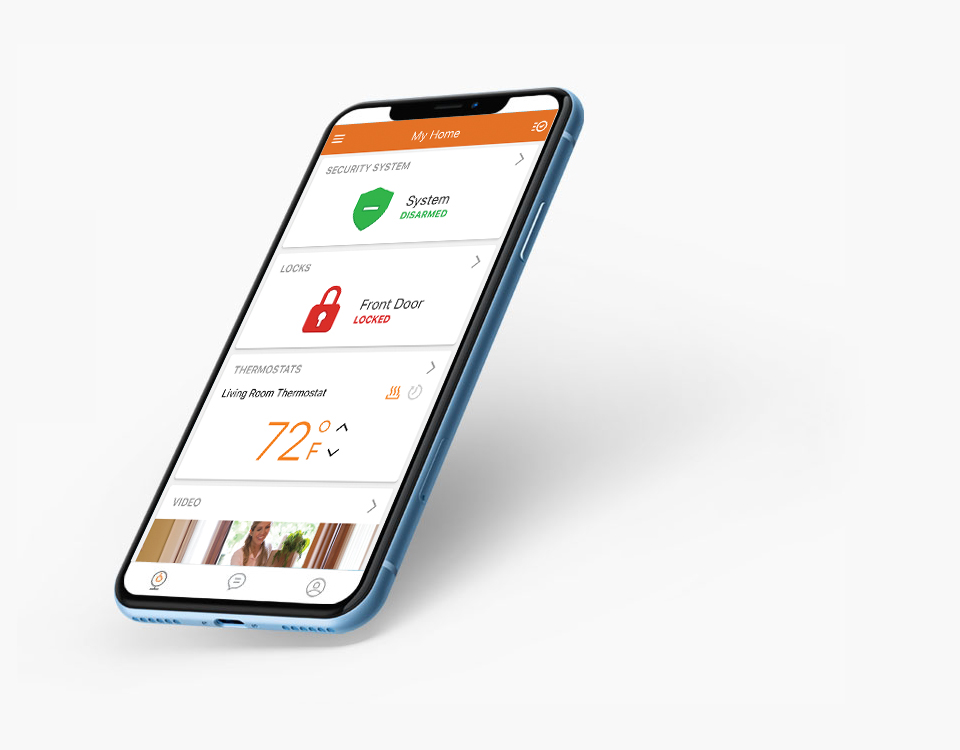